One of the core activities of CCCE is tracking and studying various issue campaigns. We are particularly interested in campaigns that redefine the boundaries of traditional politics and communication. For example, many of the political issues that engage citizens today involve broad coalitions of both traditional political organizations and direct activist groups and networks. Such campaigns combine conventional citizen activities such as voting and contacting government officials with direct action such as boycotts, public information campaigns, and the use of the Internet for educational and movement mobilizing purposes.

Many of these campaigns are also transforming the traditional geographic locations of politics from nations and particular institutional jurisdictions within them, to more fluid arenas of politics ranging from the local neighborhood to global action networks. We are interested in understanding how traditional and direct citizen action work together, and how new communication media such as the Internet shape the course of these campaigns.

Our ultimate goal is to make a wide variety of these campaigns available for policymakers and scholars to study, and for citizens to follow and to join, in ways that advance the goals of meaningful civic engagement.

CCCE does not advocate particular positions in these campaigns. We are interested in understanding how they work.

Links to other campaigns

For a narrative account of the earlier Global Exchange Starbucks campaign, look at the Deborah James interview here (the link to the interview is at the bottom of the page).

Nike Campaign
The Nike Anti-Sweatshop campaign is one branch of a larger global movement aimed at raising awareness about labor conditions in manufacturing zones of developing nations where major global corporations increasingly contract for the manufacture of their products. There are hundreds of web sites concerning these issues. 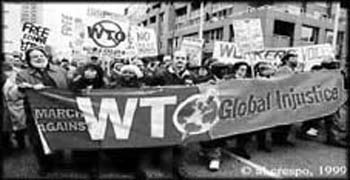 In late November 1999, tens of thousands of environmental activists, trade unionists, faith-based activists and others gathered in the streets of Seattle to protest the Millennium Round of meetings being held by the World Trade Organization, the international body charged with creating and enforcing trade agreements among many of the world’s nations. Activists accused the WTO of being undemocratic, undermining environmental regulations and promoting anti-labor and anti-human rights policies. The Internet figured heavily in the mobilization. For a detailed oral history of the Battle of Seattle protests against the WTO in 1999, see the WTO History Project, a collaborative effort between CCCE and the Center for Labor Studies.
Response from Campaign Target
World Trade Organization
Primary WTO Campaign Network Sites
Adbusters Magazine
American Lands Alliance
WTO History Project
Institute for Agriculture and Trade Policy
IATP’s WTO Watch
International Forum on Globalization
People’s Global Action
Public Citizen’s Global Trade Watch
Third World Network

The International Monetary Fund (IMF) and the World Bank (WB) are accused of fostering an unjust, destructive and corporate-controlled world economy. These institutions lend money to needy nations and impose rules on those nations as a condition of the loans that affect their development plans. In April 2000, IMF and WB ministers meeting in Washington, DC faced protests similar to the WTO protests in Seattle just months earlier. The Internet figured heavily in the education and mobilization efforts.