What’s the Economy for, Anyway?

The goal of the WTEFA project is to promote a national conversation about the eponymous question. The project began at a CCCE Roundtable lecture delivered by John de Graaf in spring 2007. The lecture, which stimulated considerable interest from the university community, became the basis of a think tank meeting that brought together UW faculty, students, and administrators. Subsequently, Susan Jeffords, the Vice Provost for Global Affairs, as well as the Rockefeller Brothers Fund, made funds available for the development of an educational program designed for students studying at the University of Washington and participating in its programs abroad. In cooperation with the Forum on Social Wealth, the Political Economy Research Institute, and the Center for Popular Economics, we have continued to expand the resource base to provide instructors at the University of Washington and beyond with materials comparing different national economic value systems. The resource database includes teaching resources, statistics, and slideshows. To learn more about the project, please visit the “What’s the Economy for, Anyway?” (WTEFA) website. The materials for the website were gathered by CCCE learning communities involving teams of UW undergraduates under the supervision of Timothy Jones and Lloyd Jansen, both former PhD students in political science, and now teaching at Bellevue and Green River colleges, respectively.

In 2011, Bloomsbury Press published John de Graaf and David Batker’s book, which is also entitled What’s the Economy For, Anyway? In the book, the authors challenge their readers to consider the point of our economy and ask: “How about we work less, enjoy more, consumer less, pollute less, destroy less, owe less, live better, longer, more meaningfully?” The argument that the book makes is that the goal of any economic system should be creating the greatest good for the greatest number over the longest run. In his 2011 review of the book, Chuck Leddy of the Boston Globe points out that the authors also “offer dozens of examples and practical solutions to help us choose another way forward” and that “taking a step back has never seemed more timely than now.” To read Leddy’s complete review, please click here.

De Graaf and Batker also produced a 40-minute movie to answer the question of what economic success means and how we should measure it. Directed by de Graaf, Bullfrog Films released the movie What’s the Economy For, Anyway? in the United States in 2010. Here is a short clip from the movie:

The What’s the Economy For, Anyway? project is also related to the efforts of the local organization Sustainable Seattle and the more recent Happiness Initiative (HI). 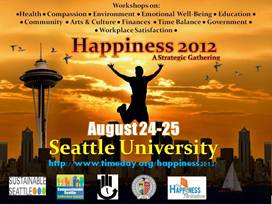 The Happiness Initiative began as Sustainable Seattle’s fifth set of regional sustainability indicators, but it presented a departure from the organization’s 20-year history of justobjective sustainability indicators. The initiative was inspired by the country of Bhutan’s work to measure Gross National Happiness (GNH) and a global trend to measure happiness instead of just gross domestic product (GDP). In 2011, the initiative became an independent national organization. The organization held a strategic gathering in Seattle in August 2012 and a movie is in the works as well. In February 2011, KCTS9 aired a 10-minute report about the Happiness Initiative, which provides a sneak peak of how the movie will look like.