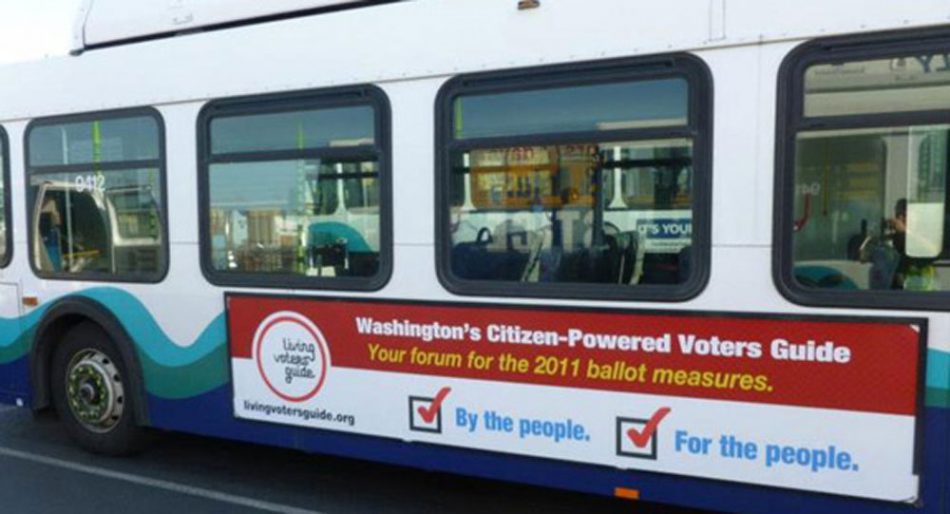 Public engagement and deliberation play key roles in democratic society. Yet, there are significant problems in both of these areas at present in America. Civic engagement is uneven at best, and thoughtful public deliberation about major issues is often displaced either by apathy or shrill and extreme voices.

CCCE Director Lance Bennett, and his collaborators Alan Borning and Travis Kriplean in computer science received a three-year $730,000 grant (#0966929, Socio-Computational Systems to Support Public Engagement and Deliberation) from the National Science Foundation (NSF). The aim of the project is to introduce civic technologies into actual political contexts to improve public deliberation in online communication forums. Professor Borning from the Computer Science and Engineering Department at UW is also a faculty advisor for CCCE. In an interview with the UW News Lab, Borning stressed the noteworthiness of receiving an NSF grant in the area of applied civic technology because the foundation generally favors physical scientific research.

This NSF-funded civic technology project called “Engage” builds on earlier work done at the Center for Communication & Civic Engagement (CCCE), such as the Puget Sound Off partnership and the MacArthur Digital Media and Learning Initiative. The Engage project is an interdisciplinary research collaboration at the University of Washington that brings together researchers from the Design, Use, Build group (DUB, which is housed in the Human-Computer Interaction and Design Department) and the Center for Communication and Civic Engagement. Together, the interdisciplinary group of scholars seeks to better support civic engagement and deliberation.

Specifically, the goal of the project is to investigate the design, implementation, deployment, and testing of innovative ways for citizens and government to communicate. Furthermore, the interdisciplinary project team surrounding Bennett and Borning aims to achieve measurable improvements in citizen engagement, participation, and deliberation, as well as to enable public officials to gain insight from always-available and readily interpretable citizen input. To achieve these goals, the researchers have also teamed up with practitioners from the Seattle City Council, the Seattle Department of Information Technology, and various civic organizations. The Engage project is comprised of three components: The ConsiderIt platform, the Living Voters Guide (LVG), and the Reflect tool. Travis Kriplean, who is a post-doctoral student in Computer Science & Engineering, developed these technologies.

The open-source platform ConsiderIt was designed by the project team in collaboration with community partners such as City Club of Seattle. The development work was done by Travis Kriplean with the aim of combining the virtues of personal reflection and public deliberation to help individuals make sense of complex issues through familiar deliberative activities. As a public deliberation platform it assists users in sorting through their own thoughts by taking stances, weighing pros and cons, as well as browsing key points made by others. Thereby, it makes it easy for contributors to make their voices heard and to find others who share their views. Because it is a structured approach to deliberation, it also helps decrease polarization and establish common ground. It nudges people toward considering tradeoffs by presenting them with ideas that resonate with a broad spectrum of their peers. And it surfaces points of agreement and potential compromise, letting contributors and organizations focus their energy on meaningful engagement and productive collaboration.

ConsiderIt guides people to reflect on the tradeoffs of an issue through the creation of a personal pro/con list, with the twist that they can adopt points others have already contributed. Based on each user’s pro/con list, the platform surfaces the most salient pros and cons overall, while also enabling users to drill down into the key points for those who support, oppose or are undecided. 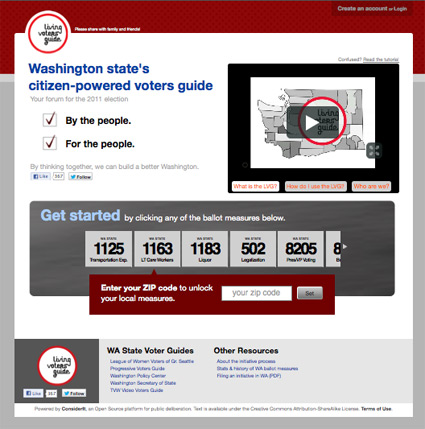 ConsiderIt was first implemented as the Living Voters Guide (LVG), which is a non-partisan and non-profit citizen-powered voter guide that lets voters listen to other voters and allows them to make their own voice heard. Built on the ConsiderIt platform, the LVG is a web-based resource for voters to advance digital democracy in Washington State. It allows citizens to access all ballot measures, read, write, and discuss them, and build personal pro and con lists for each measure they care about. In their pro/ con lists, voters can include their own points as well as those made by others. The LVG seeks to better inform voters about state ballot issues and to help them explore these issues through a respectful dialogue with other voters. The three main goals of this voter deliberation platform are to restore trust in our neighbors, to learn to trust our community’s wisdom, and to demonstrate trust in President Jefferson’s claim that an informed citizenry is the bulwark of a democracy. The LVG has been deployed twice so far for the 2010 and 2011 elections. According to Matt Rosenberg from the Social Capital Review, this cooperation project between Seattle’s City Club and the University of Washington is a “promising experiment in community-building” (Sept. 27, 2010). And the experiment was a major success with more than 600 registered users and an average of 1,000 page views per day during the run-up to the 2010 election. In addition, the Washington Technology Industry Association (WTIA) named the LVG as a finalist for the 16th annual Industry Achievement Awards. The Living Voters Guide goes into the next round for the 2012 election and one of the major enhancements for the new deployment is a fact-check function. For updates, you can also check out the LVG Twitter stream (@LVGuide).

The final component of the Engage project is the free and open source Reflect tool, which aims at improving online comment boards. Reflect helps people listen through a simple change to comment boards, namely crowdsourced comment summarization. Next to every comment, Reflect invites readers to succinctly restate the commenter’s points. These restatements are then shown in a bulleted list. Through this simple function, Reflect cannot only help show the commenter that someone is listening, it can also decrease conflicts that stem from misunderstandings, assist other readers in finding takeaways in long discussions, and build community through a new way of interacting. Reflect is used on the Living Voters Guide and the DUB blog of the Human-Computer Interaction and Design Department at the University of Washington.

To learn more, you can also watch Prof. Borning and Travis Kriplean’s presentation about “The Living Voters Guide: Supporting Reflective Public Thought” at the Computer Science and Engineering Department’s colloquium. In the presentation given on October 25, 2011, Borning and Kriplean discuss ConsiderIt, The Living Voters Guide, and the Reflect tool.