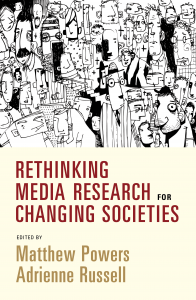 In Rethinking Media Research for Changing Societies, an edited volume by CJMD Co-Directors Matthew Powers and Adrienne Russell, some of the world’s leading theorists propose what each considers the single most pressing question for scholars concerned with media and public life. (Image courtesy of Matthew Powers.)

The world of media has transformed so rapidly that many traditional ways of studying the relationships between media and society may no longer suffice. Even the questions scholars typically ask, such as how journalism affects the public sphere, might not make as much sense as they once did; what is journalism if anyone can be a journalist and any website can count as a journal?

In Rethinking Media Research for Changing Societies, an edited volume by CJMD Co-Directors Matthew Powers and Adrienne Russell, some of the world’s leading theorists propose what each considers the single most pressing question for scholars concerned with media and public life. Then each suggests a research approach that could address the question, with attention to real world action.

The proposed questions touch on some of the issues of greatest concern to lay and scholastic publics alike, including what is happening to journalism, how corporate use of big data affects our lives, whether new media technologies have made the world more or less inclusive, and what purpose academics can serve going forward. The editors hope that the book will foster new approaches and ideas for scholars as they grapple with evolving communication problems. Because these issues interest many people outside academia, the book is written to be accessible to lay audiences. It is also suitable to college students of all levels.

The book is divided into five topical sections. The first deals with the implications of the increasing use of data. How might we make sense of corporate goals for the use of data, and what can be learned from the data collected for commercial use? The second section considers the state of journalism, including the meaning of press freedom and the ongoing relevance of traditional news values. Powers and co-author Sandra Vera-Zambrano ask, “what are journalists for today?” The answer, they suggest, may be to reinforce existing arrangements of power.

Part Three focuses on whether changing media practices and technologies are inclusive. Are counter-hegemonic communication efforts successful? Does new technology bring about greater equality, or reinforce existing racial hierarchies of power? Are new journalism practices resulting in better representation of marginalized people? The answers, the three authors in the section suggest, may be cause for dismay. The fourth section asks how communication across ever-deepening political divides might be improved. Finally, Part Five addresses the role of scholars as the world of media and public life continues to change. How can communication research be relevant? How should we think of the function of communication? What, if anything, are communication scholars fighting for?

The book concludes with a call for a deeper engagement with the goals of research and a greater clarity and focus on how scholarship can bring about change. In the epilogue, Silvio Waisbord, professor of media and public affairs at George Washington University, argues that media scholars should commit to some normative ideas of the good, for “outlining desirable elements of media and public life is necessary to clarify the analytical benchmarks that help us discern contemporary problems and outline possible solutions.” The question for Waisbord is, then, what media is needed for what public life?

Waisbord’s question will require a shift in thinking, one that the book is positioned to foster. Old ideas of a single public sphere must be shed in favor of recognition of the public as chaotic, multitudinous, splintered, and polarized. The long-accepted normative ideals of public communication need to be reevaluated considering the observable efficacy of expressions of emotions of grief and fury under conditions of oppression. And it is time to recognize that there is no common political project. Rather, the most fundamental tenets of society are contested, including what counts as knowledge, how to resolve dissent, what it means to belong to a collective national identity, and what the ideal society looks like.

Is it even possible to bring about justice in the current media moment? When the book’s authors gathered at a University of Washington conference on the “shifting landscape of public communication,” all concurred that we are experiencing a crisis. In fact, some said the landscape of public communication was better described as “crumbling beneath our feet.” In this book, which arose from that conference, the authors propose a range of approaches and thoughts on how to engage with publics in the service of fostering justice, but all agree that scholars need new ways of thinking about media and public life. The book, the editors believe, is a promising place to start.