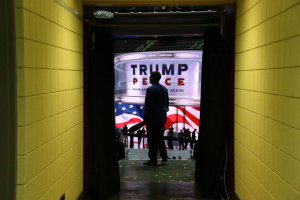 An attendee takes in the scene after the Republican National Convention wrapped in Cleveland, July 21, 2016. The fifth and final volume of the Senate Intelligence Committee’s report revealed new details about Russian links to the Trump campaign in 2016 and offered broad warnings for future elections.CHANG W. LEE/NYT

CCCE founder W. Lance Bennett and long-time collaborator Steven Livingston have an Op-Ed in the Boston Globe on Russian interference in the US election process and the complicity of a discord-hungry US population.

Excerpted from the piece:

Investigations by news organizations, US intelligence agencies, the Republican-led Senate Intelligence Committee, and of course by special prosecutor Robert Mueller, all reached the same conclusion: The Russian government meddled in the 2016 presidential elections. Some observers have gone so far as to conclude that Russia’s machinations were essential to Trump’s victory. By taking advantage of social media’s tendency to aggregate and deepen political passions, Russia gave vital assistance to Donald Trump’s campaign.

Now fast forward to 2020. In February, intelligence officials warned House lawmakers that Russia was at it again, to help President Trump win reelection. The Russians are clearly hell-bent on undermining American democratic institutions.

No matter how cunning the trolls or relentless the bots, Russia could not reasonably expect to achieve meaningful results in the absence of an already receptive audience.