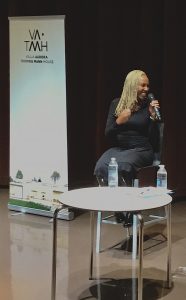 #BlackLivesMatter co-founder Opal Tometi takes questions from an audience at the Seattle Public Library and also participating via video link from Berlin, following her talk on social media and social movements Friday, Oct. 25. Tometi was the keynote speaker at the two-day conference, which focused on political uses of digital technology.
Photo by Polly Straub-Cook

One of the most powerful tools to keep democracy alive can be tucked into the back pocket of your jeans. The ways that digital technology can be used to pursue political solutions was the focus of discussion at “Pocket Democracy,” a pop-up Seattle conference last month that included remarks by Black Lives Matter cofounder Opal Tometi, CCCE founding director Lance Bennett, and others, and included via video link participants and speakers in Berlin. The conference was sponsored by The Thomas Mann House in Los Angeles and the Goethe Institute Seattle pop-up. Also collaborating on the event were STATE Berlin, World Affairs Council Seattle, the UW Center for West European Studies, and the UW European Union Center.

The Oct. 24-25 event included seminars and workshops on the political implications of digital communication and strategies for developing new modes of engagement. Participants discussed the risks associated with technology, such as the spread of disinformation and the manipulation of images and videos, as well as possibilities for such pro-democracy uses as supporting free and fair elections and automating detection of false news and altered images.

Keynote speaker Tometi talked about how activists used digital technologies to coordinate protests in the wake the 2014 killing of Michael Brown, an unarmed 18-year-old who was shot in Ferguson, Mississippi, by a police officer.

“Righteous, beautiful, courageous people were protesting,” she said. “We used social media to mobilize people across the country to go to Ferguson. In two weeks, we organized 500 people to go to Ferguson so they knew they were not alone.”

Digital communication is important for social and political change, but it is not enough by itself, she cautioned.

In response to a question from a participant in Berlin, Tometi said that social media is best used as a tool for mobilization, but that there is a limit to its power to facilitate persuasion. 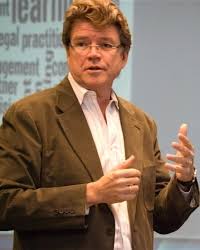 Dr. Lance Bennett, founding director of the CCCE, talked about efforts to use digital technologies to spread disinformation and undermine democratic governments worldwide.
Photo courtesy of the University of Washington.

Following Tometi’s remarks, CCCE founding director Lance Bennett gave a sobering talk on threats to democracies around the world that is due in part, he said, to a very successful far-right strategy of using digital technology to spread disinformation, propaganda, and conspiracy theories.

“There is an organized production of disinformation around the world,” he said. “What it adds up to is an attack on liberal democracy.”

The goal of the far right, Bennett said, is to bring about ethnic nationalist systems of government that  exclude ethnic and religious minorities and immigrants, attack the press, and block action on climate change.

Technology, including social media, is deeply implicated in the spread of disinformation and hate speech, he noted, adding that those problems can be very difficult to address. For example, a number of parliament members in Sweden have been targets of death threats on social media, but since those threats are made in the form of cartoons and jokes, they are hard to control. Algorithms cannot accurately screen for cartoons and humor, and perpetrators can insist that they are within their rights to “joke.”

But more could be done, Bennett said.

One problem that social media companies could at least try to address is the use of fake accounts to spread disinformation or artificially inflate the appearance of popular support for a person or movement.

Estimates from different audits suggest that as many as a quarter of Donald Trump’s Twitter followers are fake, Bennett said. And a study showed that substantial numbers  of the Facebook followers of the far right group Alternative für Deutschland (Alternative for Germany) were not located in Germany and appeared to be managed accounts.

Facebook has the capacity to test solutions to the use of its platform to undermine democracy, but remains resistant, Bennett said. Indeed, when media companies remove suspect accounts, political factions often complain of partisanship. The regulatory problems are important to address, but are likely to become caught up in the partisan politics of many nations.

Like Tometi, Bennett noted that some of the most important measures to protect democracy extend beyond technology. Democracy is undermined when governments no longer produce solutions to the problems of their citizens, he said.

Workshops  at the conference focused on the potential irrelevance of political parties should they fail to use digital technologies to engage citizens, as well threats to democracy arising from election-season disinformation campaigns and what technical and political solutions might be available. The conference concluded Friday afternoon with a session on cybersecurity and elections.

By CCCE|2020-11-04T19:25:47+00:00November 19, 2019|news|Comments Off on #BlackLivesMatter co-founder Opal Tometi and CCCE founder Lance Bennett featured at Seattle conference on tech and democracy