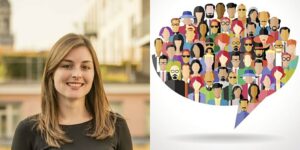 Social and political issues make up the lion’s share of news coverage, drawing individuals’ attention to public opinion and policy implications of these issues. However, in recent years, public opinion itself has become a hot topic. Journalists have been accused of misrepresenting what the public really wants, as they failed to predict Brexit and the election of Trump in 2016. Despite these criticisms, news portrayals of public opinion still serve an important democratic function: helping people learn about what other citizens think about issues, which in turn influences their own political attitudes and behaviors (Gunther, 1998; Mutz, 1992).

In this CJMD Spotlight, Dr. Kathleen Beckers discusses how public opinion is portrayed in U.S. broadcast news. Presenting the results of an extensive content analysis, she unveils the myriad ways in which journalists refer to public opinion and the implications of these portrayals. Speaking to the diversity of opinions (or lack thereof) in news portrayals, she highlights the challenges journalists face in “reading” public opinion and how this misreading unwittingly leads to erroneous depictions of public opinion, the consequences of which are especially critical for a high-stakes election.

Speaker biography:
Kathleen Beckers (PhD, University of Antwerp) is a postdoctoral researcher at the Department of Political Science at the University of Antwerp, Belgium. Her research, which focuses on journalism and public opinion, has been published in Journalism and Mass Communication Quarterly, Journalism Studies, Journalism, and Digital Journalism. Funded by the Research Foundation Flanders (FWO) and the recipient of a 2020 fellowship from the Belgian American Educational Foundation (BAEF), she was a visiting scholar at the University of Washington where she conducted research on the representation of public opinion in U.S. news media.